The repaired Snyder Brook pony truss bridge on the PRT was reinstalled on December 5, 2015. This winter it will be open to the public for snowmobilers, skiers, and walkers, and next spring it will remain open for bicyclists, hikers and pedestrians while c 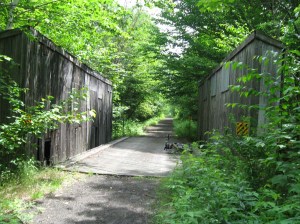 arpenters restore the siding that protects the structure.

The video link here shows the moving of the bridge from its original space.

Pony truss bridges have two distinguishing features: wooden diagonal braces, together with steel tension rods that hold the braces in plumb. This single-span bridge style was used frequently by the Boston & Maine Railroad as a substitute for steel bridges because it was both inexpensive and, before failing under the weight of a train, gave clear signs of deterioration.

Randolph’s pony truss bridge, a “boxed Howe truss,” was built in 1918 by the railroad company, and continued to support freight trains until the Berlin branch was discontinued in 1996. (A similar bridge spanning the Moose River in Gorham was destroyed by arson in 2004. This bridge has been reconstructed, using the original steel parts. The bridge is currently on outdoor display under the auspices of the Gorham Historical Society.)

Although the bridge’s basic structure was still stron 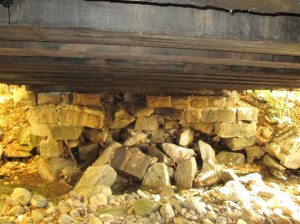 g enough to support recreational activities, by the winter of 2013-14, the abutment on the east side had deteriorated due to
water pressure during the spring run-off. The bridge was then closed to all traffic, and snowmobiles were rerouted. The following summer, it became evident that the bridge might not withstand another winter.

For over a year, the NH Bureau of Trails had been developing a plan of action as well as obtaining funding for the repair through 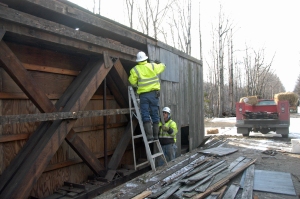 the federal Recreational Trails Program. They were able to authorize and implement an emergency rescue. By early December 2014, they had engaged large-project contractor New England Field Services, LLC, to prepare a dirt platform on the west side of the brook and to remove the interior wood siding so the bridge could be moved. 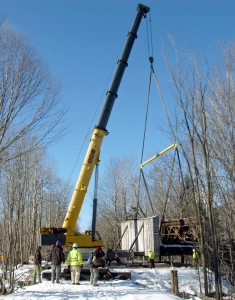 On December 5, 2014, a 275-ton-capacity crane operated by Vermont’s CCS Crane Service lifted the bridge off its abutments and swung it onto the prepared site.

Plans were made to repair the existing structure and the abutments, using the original stones. This process was delayed until fall 2015. Ben Wilson reported, “The West abutment was completely rebuilt with a wing wall using all the original material and 37 yards of concrete backing it up. The brook was also moved back to the middle channel. The carpentry work will be completed in May and until then, the trusses will be covered and protected from the weather.” 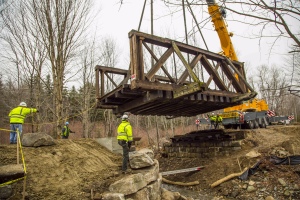 The final steps were taken with the return of the crane, and the successful lifting of the pony truss bridge back into its original position on December 5th. NH Division of Historical Resources Director Ben Wilson is now planning where to provide interpretative information about the Presidential Rail Trail’s historic treasure. A rapid-motion video of the move “back home” is linked to the post below this account. 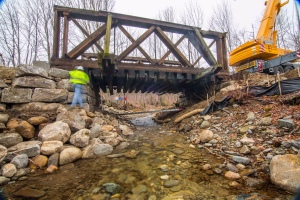 We would like to express our thanks to many people who have made this possible:

Director Phil Bryce of the Division of Parks and Recreation;
Much of the information for this article has come from two sources: former NH historian James Garvin, who completed the bridge’s inventory for the NH Division of Historical Resources; and Edith Tucker, from her articles in the Berlin Reporter and Coos Democrat.

On January 1, 2016January 2, 2016 By hudsons2plus2In UncategorizedLeave a comment
[Trail Conditions]

Adventure Out Segment on FPRT