The scenic Presidential Rail Trail, like many rail trails around the country, is experiencing a dramatic increase in users, including cyclists, walkers, runners, cross-country skiers, naturalists, fishermen, equestrians, dog teams, and even llamas. Our public Facebook group, FriendsofthePresidentialRailTrail, has more than doubled its membership in the last four years, and in late June 2021 numbered more than 750 individuals.

The Cross New Hampshire Adventure Trail. The most important development for the PRT has been the founding in 2017 of the Cross New Hampshire Adventure Trail that runs between Woodsville and Bethel, Maine, traversing two sections of our rail trail. xNHAT’s energetic and visionary creator Marianne Borowski described the route as “a continuation of the Cross Vermont Trail in style and spirit: a combination of rail trails, back roads, dirt roads, and paved roadways.” Its website xNHAT includes an excellent interactive map. A packet of printed information is available. There is lots of information on local businesses and advice on planning a trip; points of interest, like historic bridges, are described in detail. Those who complete the full journey across the state can acquire an attractive embroidered patch.

The xNHAT has brought increased media attention to the PRT, including Rails-to-Trails ranking as the top rail trail in New Hampshire. A 2021 article in Yankee magazine describes a cyclist’s journey in vivid detail. In the last few years many of our Facebook group’s members have posted wonderful photos and comments at all seasons.

Ms. Borowski has not only publicized the PRT but has helped finance improvements to the trail, like the installation of five newly invented devices called “beaver deceivers” that keep beaver activity from flooding the trail. The installation of beaver deceivers mitigates damage by beavers yet allows them to continue living and acting like beavers, enhancing the landscape and providing entertainment for homo sapiens. In May 2021 she arranged the installation of a Portapotty near Randolph’s municipal building on the Pinkham B (Dolly Copp) road. Her organization is funding its installation and maintenance.

Ms. Borowski has not only publicized the PRT but has helped finance improvements to the trail, like the installation of five newly invented devices called “beaver deceivers” that keep beaver activity from flooding the trail. The installation of beaver deceivers mitigates damage by beavers yet allows them to continue living and acting like beavers, enhancing the landscape and providing entertainment for homo sapiens. In May 2021 she arranged the installation of a Portapotty near Randolph’s municipal building on the Pinkham B (Dolly Copp) road. Her organization is funding its installation and maintenance.

Improvements to the PRT. Substantial progress was made in 2020. NH’s Bureau of Trails (BOT) repaired bridges and worked on the trail surface in the spring. In early April an extensive washout destroyed a major beaver dam to the east of the Pinkham B Road in Randolph, and the deluge gutted the trail. BOT wasted no time bringing in the needed machinery and manpower by mid-April to restore the trail. A beaver deceiver has been installed at this site.

An intense rainstorm on July 14th wreaked havoc around the region, washing out a bridge on the Moose River that forced the official closure of the trail near Gorham. A temporary fix allowed determined cyclists to carry their bikes across the gap. BOT soon moved heavy equipment to the site, reinstalling a small bridge and reopening the trail.

In September 2020 BOT completed extensive PRT improvement in the Pondicherry section, redoing 4 miles: ditchline and resurfacing of all 4 miles; 12 culverts replaced; 4 beaver deceivers installed; total expenditure of $105,000. A grant from the Federal Lands Access Program (FLAP) was secured by our member David Govatski that was matched by a 20% grant from the US Fish & Wildlife Service. The final product has greatly improved the trail’s surface. Our steering committee is hoping to obtain funding for other segments of the PRT.

In November 2020, Dennis Thompson (of New England Field Services of Stewartstown) was hired by BOT to repair the decaying abutments beneath the Israel River bridge in west Randolph.  It was quite a sight to watch an enormous crane lift the 65,000-pound iron bridge off and then, once the repairs were finished, return it back onto its supports.  An early November snow added to the challenge of the work.

We are very grateful to BOT’s former director Chris Gamache and Clint Savage for their continuing support. The PRT is an important segment of NH’s snowmobile network in the winter, and much of BOT’s activity is financed by snowmobile licensing. Cross-country skiers, dog sledders, and snowshoers also are allowed winter access. We ask walkers to refrain from using the trail when the snow is soft, as your postholes ruin the trail for other winter users.

Other Activities. The New Hampshire Division of Historical Resources has conducted a study of the historic White Mountain Railroad, documenting various aspects of the original system to which the PRT once belonged. Our steering committee is working to identify spots where we might post signage with historical information.

During the non-motorized seasons, the PRT Friends continue performing various tasks: picking up trash, mowing, and removing blowdowns that have fallen across the trail. If you encounter downed trees on the trail, you can report them to us with a Facebook post including its location or call BOT directly: 603-271-3255 (Concord main office); 603-788-3155 (Clint Savage in Lancaster). As we meet cyclists and other users, we enjoy answering their questions to help them appreciate the trail. Our major goal is to preserve this extraordinary natural treasure for future generations.

Many thanks to our photographers:
Carol Bourque, Abby Evankow, Bob Holdsworth and Edith Tucker 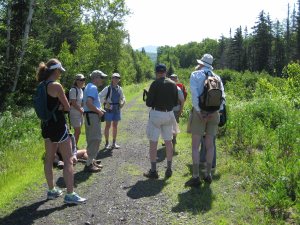 A group of walkers and cyclers joined the Randolph Mountain Club’s “Tales and Trails” excursion in mid-July on the Presidential Rail Trail between the Pinkham-B Road and Mineral Springs.
END_OF_DOCUMENT_TOKEN_TO_BE_REPLACED

The Friends of the Presidential Rail Trail have joined together to promote, protect, and maintain New Hampshire’s Presidential Rail Trail between Gorham and Whitefield for non-motorized recreation during the snow-free times of the year.
– Come travel the trail on foot or by bicycle
– Look for birds, bears, moose, turkeys and wild flowers
– Hunt and fish in season
– Enjoy the views of the mountains and marshes

Adventure Out Segment on FPRT